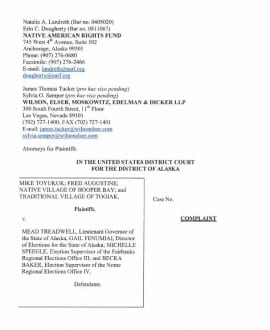 Last Friday the Native American Rights Fund and co-counsel Wilson Elser filed suit in federal court charging Alaska state elections officials with ongoing violations of the federal Voting Rights Act and the United States Constitution.  The suit claims state officials have failed to provide language assistance to citizens whose first language is Yup’ik, the primary language of many Alaska Natives in the Dillingham and Wade Hampton regions. The relief the plaintiffs have requested includes implementing procedures in the Dillingham and Wade Hampton areas similar to those secured by Alaska Natives in the Bethel area in the Nick, et al. v. Bethel, et al.litigation, requiring state election officials to obtain approval from the federal court or the Attorney General of the United States for any changes in those procedures, and to appoint federal observers to oversee future elections in the two regions.  “Language assistance” requires translating ballots and other election materials and information into Yup’ik and providing trained bilingual staff to register voters and to help voters at the polls through complete, accurate, and uniform translations.

Natalie Landreth, Senior Staff Attorney with the Native American Rights Fund, said: “The law requires state elections officials to provide language assistance to voters in Yup’ik and all of its dialects in all covered regions of Alaska, including Dillingham and Wade Hampton.  Without complete, accurate, and uniform translations, the right to register and to vote is rendered meaningless for many Native voters.”

“State election officials continue to ignore their responsibilities to Alaska Natives,” said James Tucker, co-counsel at Wilson Elser.  “That indifference has contributed to depressed voter participation in the neglected Native communities, including some with turnout 20 to 30 percent lower than turnout in non-Native communities.  It is unfortunate that Native voters have had to turn to the federal court to secure their fundamental right to vote.”

The voting guarantees of the Fourteenth and Fifteenth Amendments to the United States Constitution prohibit state officials from denying the right to vote on account of race or color, which federal courts have found includes Native voters.