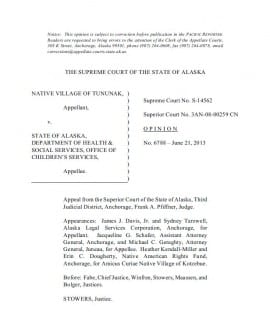 Today the Alaska Supreme Court issued an important ruling in the case Native Village of Tununak v. State in which it held that the Indian Child Welfare Act (ICWA) implicitly mandates that good cause to deviate from ICWA’s adoptive placement preferences be proved by clear and convincing evidence, not the weaker preponderance of the evidence standard.  This is an important decision because Alaska had been the only state where courts applied the preponderance of the evidence burden of proof to findings of good cause to deviate from ICWA’s adoption preferences.  In addition, the court’s opinion also includes important language on the need for trial courts to evaluate the suitability of placements not under “white, middle class standards” but under “the prevailing social and cultural standards of the Indian community.”

NARF authored an amicus brief on behalf of the Native Village of Kotzebue and is proud to have worked with our partners on this important case.  To read a copy of the Alaska Supreme Court’s opinion, click here.