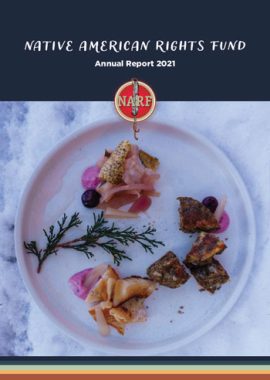 The annual report is an opportunity to see how your donations are paying off as an investment in justice. The report covers projects and case development from the past year and is organized by NARF’s five guiding principles:

In addition to NARF’s work, this year’s report features chef Sean Sherman (Oglala Lakota) and his focus on revitalizing Indigenous food systems in a modern culinary context. We hope you can take a moment and check out the report!

From the Report: Executive Director’s Report

2021 was the fifty-first year that the Native American Rights Fund has been serving as the national Indian legal defense fund providing legal advice and assistance to tribes, Native organizations, and individual Indians in cases of major importance across the country. Once again, we were proud that we were able to help our Native American clients achieve several significant legal victories and accomplishments during the year.

The new Biden Administration took action to reverse several actions taken by the Trump Administration that adversely affected NARF’s clients. The incoming Biden Administration revoked the illegally issued permit for the Keystone XL Pipeline which was opposed by the Rosebud Sioux Tribe and the Fort Belknap Indian Community. President Biden issued a proclamation restoring
the Bears Ears National Monument to its original size plus some additional acreage. President Trump had previously issued an Executive Order greatly diminishing the National Monument over the objections of tribes including the Hopi Nation, Ute Mountain Ute Tribe, and the Pueblo of Zuni, NARF’s clients. The Biden Administration also stopped the National Park Service from adopting regulations implementing the National Register of Historic Places that would have prevented traditional cultural properties, cultural landscapes, and places of traditional religious and cultural significance from being listed. NARF represented the Native Village of Tyonek, the Blue Lake Rancheria, and the National Association of Tribal Historic Preservation Officers in this process.

In Alaska Department of Fish and Game v. Federal Subsistence Board, the Alaska federal district court upheld the Federal Subsistence Board’s authority to authorize emergency subsistence hunts for rural residents. NARF represented the Organized Village of Kake who intervened in the case to support the Federal Subsistence Board’s authority. The Biden Administration also took several actions which benefitted NARF’s tribal clients in Alaska by reversing previous Trump Administration actions. President Biden signed an Executive Order reinstating the Northern Bering Sea Climate Resilience Area which will protect the sensitive ecosystem and the subsistence lifestyle of the Alaska tribes in the area. The Biden Administration denied a permit for the proposed Pebble Mine which NARF’s tribal clients in the Bristol Bay area oppose. President Biden also placed a full moratorium on all further oil and gas activities in the Arctic National Wildlife Refuge which NARF’s tribal clients in that area want to protect from development. After the Trump Administration had denied NARF’s Alaska tribal clients participation in the Bering Sea-Western Interior Proposed Resource Management Plan, President Biden signed an Executive Order that now has the Alaska tribes participating.

In Brackeen v. Haaland, the Fifth Circuit Court of Appeals en banc generally upheld the authority of Congress to enact the 1978 Indian Child Welfare Act, held that the Act’s definition of “Indian Child” did not operate on the basis of race, but found certain sections of the Act to be unconstitutional. All the parties in the case are asking the U.S. Supreme Court to review the Fifth Circuit’s decision. NARF has filed a tribal amicus brief supporting review on behalf of 180 tribal nations and 35 tribal organizations.

NARF continues its Voting Rights Project and its work with the Native American Voting Rights Coalition. In addition to litigation and the work associated with leading the Coalition, we are  currently engaged in securing polling places on the reservations, securing address reform for Native voters so they can register and receive ballots in the mail, and a redistricting project to undo much of the damage to Native American representation across the country.

The U.S. District Court for the District of Columbia has granted final approval of the $59 million settlement in Pembina Chippewa v. United States. NARF represents the Turtle Mountain Chippewa, Chippewa Cree, White Earth Band of Minnesota Chippewa, and the Little Shell Chippewa Tribe in this case against the federal government for misaccounting and mismanagement of
their tribal trust fund, the Pembina Judgment Fund.

These legal victories and accomplishments would not have been possible without the contributions and grants from the many supporters of our nonprofit organization. We thank you for your support and hope that your support will continue in 2022 and beyond so we can continue to pursue justice for Native Americans.