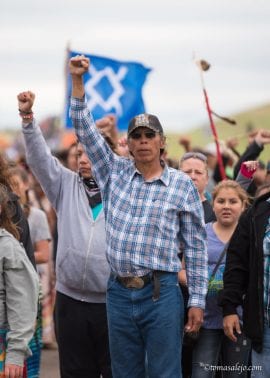 The Native American Rights Fund is pleased with the decision of the Army Corps of Engineers to halt the construction of the Dakota Access Pipeline. The Army Corps’ decision to not allow the pipeline to cross under Lake Oahe was both legally and morally correct.  We are proud of the Water Protectors and the Standing Rock Sioux Tribe and the perseverance they showed in the face of overwhelming odds.  This battle has been won. However, until the pipeline is actually re-routed and the threat to the main source of drinking water of the Standing Rock Sioux Tribe is alleviated, we as Native people must remain vigilant.  We must be ready to meet any new threat to the Standing Rock Sioux Tribe and its members.  Mni Wiconi.  Water is Life.