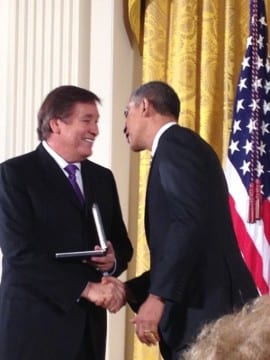 NARF National Support Committee member Billy Mills was awarded the 2012 Presidential Citizens Medal on February 15th by President Barak Obama.  Mills is a co-founder and the National Spokesperson of Running Strong for American Indian Youth, an organization that strives to build the capacity of communities, grassroots Indian organizations, families, and individuals to leverage their strengths and solve problems.

“I am humbled and honored to be recognized by the President in this extraordinary way,” said Billy. “The most powerful thing you can give to a child is a dream. I hope every child in Indian Country knows what is possible if you follow your dream.”

Running Strong and NARF are two of seven national Native nonprofits that have formed the Native Ways Federation, a workplace giving and charity accountability organization serving tribes and Native peoples around the country, leveraging national strength for local impact.

Mills was one of 18 people who received the Presidential Citizens Medal, the second-highest civilian award in the United States, second only to the Presidential Medal of Freedom.  Each year some 6,000 applications are received by the White House for consideration to receive the Medal.