School Board Agrees to Amend Policy on Graduation Dress Code 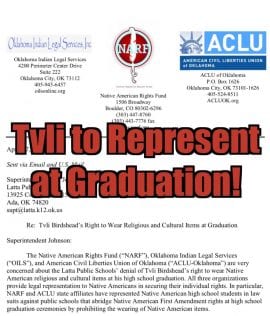 An update on Tvli Birdshead’s efforts to wear an eagle feather at his graduation:

NARF joined Tvli and Taloa along with the ACLU and over 50 members of the local Native community in attending the Latta School District Board meeting on Monday, May 6. After hearing about the cultural and religious importance of eagle feathers and other regalia, the board agreed to amend their graduation policy in order to accommodate Tvli’s request. We are pleased that the district chose to allow Tvli to exercise his religious rights consistent with federal and state law.

Congratulations 2019 Native graduates! We recognize the hard work that each of you has devoted to reach this significant goal. We honor your efforts and your ongoing determination.

Every spring, NARF is contacted by Native American high school seniors from across the country. Unfortunately, the reason that they contact us is not to celebrate their hard-earned success, but because their school has prohibited the wearing of eagle feathers or other regalia at graduation. Schools and districts that understand the religious significance of eagle feathers often accommodate these requests. However, some schools do not. Students are forced to choose between honoring cultural and religious beliefs and participating in graduation, a once-in-a-lifetime event.  That is a decision that they should not have to make.

Most recently, NARF was contacted by Taloa Birdshead and her son Tvli. Tvli, a citizen of the Chickasaw Nation and a descendent of the Choctaw Nation and Cheyenne and Arapaho Tribes, is getting ready to graduate from Latta (Oklahoma) High School. He and his mother, Taloa, alerted the school of Tvli’s plans to wear a sacred eagle feather, Chickasaw honor cord, and beaded cap at the graduation. However, their request was denied by the school principal and superintendent. The Birdsheads are scheduled to appear before the school board on May 6 to present their issue with the hope that they can educate the school district about the religious and cultural importance of their request and come to a fair resolution.

At the family’s request, NARF (along with the American Civil Liberties Union of Oklahoma and the Oklahoma Indian Legal Services) sent a letter to the Latta Public School Superintendent urging him to reconsider his decision.

The letter highlights the discrimination inherent in allowing some academic honor cords, but not tribally issued academic honor cords. It also explains the religious significance of eagle feathers, and how both federal and state law protects their use. In fact, Oklahoma Attorney General Mike Hunter recently wrote a letter advising the Vian School District that a ban on eagle feathers is likely unlawful. We urge the Latta School District to allow Tvli to exercise his religious rights consistent with federal and state law.

NARF has a long history of assisting students who are prohibited from wearing eagle feathers at graduation ceremonies due to narrow graduation dress codes. We continue to advocate for these graduates so they can celebrate their great successes without sacrificing their tribal identity.

As part of this advocacy, we have created a website for students and their families that includes background information and resources about wearing eagle feathers at graduation.