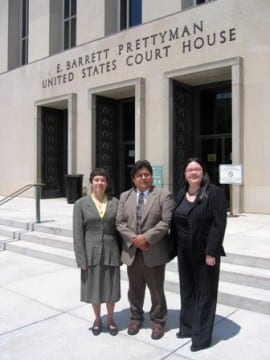 Washington D.C. – On July 24, 2008, the U.S. District Court for the District of Columbia heard oral arguments on 3 motions in Nez Perce Tribe v. Kempthorne, a tribal trust fund case in which NARF represents 12 named plaintiffs suing the government for accountings and breaches of trust regarding their almost 2-centuries old trust funds.

The government argued for dismissal of the Nez Perce and 7 other of 37 tribal cases. When the Court asked why these 8 cases were targeted, the government responded, “These are the tribes that want to litigate . . . it’s really not much more complicated than that.” Tribes in the other 29 cases have accepted the government’s offer to try to resolve their claims through informal processes. The Court took the “very complex” dismissal motion under advisement and likely will decide it by the end of September 2008.

NARF attorney Melody McCoy argued that the Nez Perce case should be a class action on behalf of 260 tribes. “There are hundreds of tribes that do not have the resources to bring their own cases.” The Court was reluctant to certify a class of tribes because that might “trespass on their sovereignty,” but wondered whether some or all of the unrepresented tribes would voluntarily join the Nez Perce case. NARF attorneys are researching and assessing that option as the Court considers the class certification motion.

The third motion argued was by the Nez Perce and 22 other tribes for a trust records preservation order. The Court denied that motion on the grounds that it saw no need for judicial oversight of lost or damaged trust records at this time.

The three-hour hearing was well-attended by many, including Nez Perce Tribal Chairman Sam Penney. “I was pleased to represent my Tribe and the potential class members at the hearing and to support NARF’s battle on our behalf.” Also in attendance was NARF Board of Directors’ Chairperson Delia Carlyle of the Ak-Chin Indian Community. “I’m very nervous about the outcome of the Nez Perce case and my own tribe’s case. The court doesn’t seem to understand what we’re up against with the government.”