Bring the Voices and Values of Native Americans to the Table 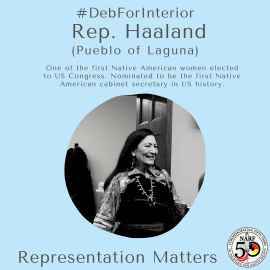 As Americans, whether we live in the shadow of the Rockies, the Mississippi watershed, or anywhere else in this country, we’re all on land that originally was home to Native Americans—and we’re all in the crosshairs of a widening climate crisis.

Next week, that hard history and harrowing future converges around Rep. Debra Haaland, D-NM, when the Senate Energy and Natural Resources Committee votes on whether to advance her nomination to become the first Native American ever to serve as a federal cabinet secretary.

If confirmed as Secretary of the Interior, Haaland would play a key role in reshaping government relations with Indigenous peoples, conserving our natural resources and helping us avert a climate catastrophe.

All of us should pull for her to succeed, and should urge our Senators to vote to confirm her.

Long centuries before the first Europeans set foot on this continent, Haaland’s Indigenous ancestors were building homes, finding food and raising their families among the mesas and foothills of what is now the American Southwest.

A 35th-generation member of the Pueblo of Laguna nation, Haaland would bring a uniquely American experience that has yet to inform American governance at the highest level.

“The historic nature of my confirmation is not lost on me, but I will say that it is not about me,” Haaland said Tuesday during her confirmation hearing before the Senate Energy and Natural Resources Committee. “Rather, I hope this nomination would be an inspiration for Americans—moving forward together as one nation and creating opportunities for all of us.”

The background, perspective, and spirit of national unity she brings is urgently needed now, as the Interior Department takes the lead in three overarching missions critical to our future—in this country and around the world.

First, we need to start managing our public waters and lands in a way that helps us confront the climate crisis, which has uniquely impacted Native people. That will be part of Haaland’s job, as head of the agency that oversees the national parks, monuments, wilderness areas, and other federal lands that cover a fifth of the country, in addition to federal ocean waters.

President Biden has hit pause on new oil and gas leases on those public resources. That leaves the industry with enough existing onshore and offshore leases to cover the state of Georgia, while the administration reviews the best options for managing public lands and waters.

Haaland understands the science. We’ve got to cut the dangerous carbon pollution from burning fossil fuels in half by 2030 and stop adding it to the atmosphere altogether by 2050, to avert the worst of raging wildfires, soaring temperatures, drought, and other climate hazard and harm.

We can count on Haaland to help make sure public resources are part of the solution, not the problem.

Second, the Interior Department protects endangered species and conserves critical habitat. That means Haaland will be driving another key initiative—Biden’s plan to conserve at least 30 percent of US lands and ocean waters by 2030—up from about 12 percent and 23 percent, respectively, today. Global leaders recognize this urgent imperative, and Haaland can help get us there.

Right now, we’re losing entire species faster than at any other time since the dinosaurs disappeared some 60 million years ago. A million species are on the brink of extinction—many within decades—largely due to rapacious destruction of natural habitat. The Biden 30 by ’30 plan aims to save enough critical habitat to give the natural world a fighting chance—before it’s too late.

Finally, the Interior Department will oversee the effort to improve government relations with the 574 federally recognized tribal nations, from the East Coast tidal basin to the great Pacific Northwest and Alaska.

After generations of taking our lands and trying to destroy our culture, the US government continues to marginalize the rights of Indigenous peoples. We still struggle to compel the US government to honor the treaties, statutes, court decisions, and trusts meant to protect our fundamental rights. We still fight for the access we’ve been promised to our traditional waters and lands, for a say in the use of shared resources, and for basic educational, health, and economic opportunities.

Making good on those promises, protecting those rights, and advancing those opportunities are part of the broader mission Biden has taken on to make our country more equitable and just. With the Senate’s blessing, Haaland will bring the voices and values of Native Americans to the table in a way that will benefit every American, now and in the future.