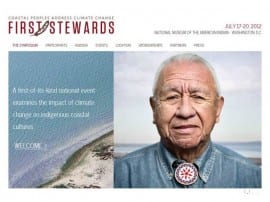 This week NARF Staff Attorney Heather Kendall-Miller and Staff Attorney Erin Dougherty are in Washington, D.C. for the First Stewards Symposium, a gathering for hundreds of tribal leaders, witnesses, and scientists join climate experts and policymakers for a first-of-its-kind national event to examine the impact of climate change on indigenous coastal cultures.

First Stewards is being held at the Smithsonian’s National Museum of the American Indian and is hosed by four tribes — the Hoh Indian Tribe, the Makah Tribe, the Quileute Tribe, and the Quinault Indian Nation.

Erin was a presenter on the Alaska Panel, which was introduced by Senator Mark Begich and included representatives from four Alaskan villages suffering from severe erosion.  Erin discussed NARF’s work with Alaska Native tribes and their efforts to deal with the effects of climate change on village infrastructure and subsistence.