One of NARF’s five priorities is to develop Indian law. One effective way to advance that priority is by supporting the next generation of Indian law specialists through our Law Clerk Program. Our ten- to twelve-week summer program for second-year law students gives students the opportunity to gain real-world experience working on high-stakes, Indian law issues.  NARF’s projects are extremely challenging because NARF practices before federal, state, and tribal forums, and most of our cases involve complex and novel legal issues.

This summer, the Law Clerk Program is again supported by a generous grant from the Confederated Tribes of Siletz Indians through the Siletz Tribal Charitable Contribution Fund.  Gaylen Edmo (Shoshone Bannock/Potawatomi and Ottawa), a law clerk in the Boulder, Colorado, office, is this year’s recipient of the Siletz grant.

Gaylen  is an enrolled member of the Shoshone-Bannock Tribes of Fort Hall, Idaho and also descends from the Potawatomi and Ottawa Tribes of Michigan. He was raised on the Fort Hall Indian Reservation.  Gaylen is an incoming 3L focusing on Federal Indian law at the University of Idaho College of Law, in Moscow, Idaho. He has served in University of Idaho Native American Law Students Association leadership all three years of law school, serving as co-chair his final two years. Prior to law school, he received his BA in Environmental Studies and Sustainability from Boise State University.

At an early age he understood that his upbringing in Indian Country was distinct in many ways from the non-Indian community. His family has continuously served in tribal leadership positions since the pre-treaty era. Because of this, he was raised on discussions of tribal sovereignty, treaty rights, and the effects of federal Indian policy. His grandfather, Kesley Edmo Sr. (Shoshone-Bannock) and grandmother, Irene Sagataw Mancilla (Potawatomi and Ottawa) were both subjected to the detrimental effects of Indian boarding schools. Understanding how government policies such as boarding school assimilation and urban relocation shaped his own life is an integral part of why Gaylen decided to pursue a career focused in federal Indian law. 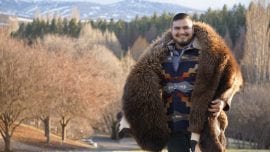 One of the most important lessons that he takes from an upbringing on the reservation, is that we continue to draw Poha (power) from the unwanted tragic events and experiences that our forefathers and foremothers survived. As descendants of prior generations that survived the darkest mechanisms of Indian policy, he believes we continue to write the narrative of Indian resilience and strength. Gaylen chose to pursue a clerkship with NARF because he believes the organization’s values align with his cultural teachings of honoring our history and traditions, building on the foundation of Indian law, and continuing to fight our battles as Indian people; though today they are fought in a courtroom.

Gaylen has worked for his tribes in both the Tribal Water Resources and the Tribal Resident Fisheries Departments. Last summer he worked for Mark Echo Hawk at Echo Hawk and Olsen, PLLC in Pocatello, Idaho. Those positions along with his tribal teachings in hunting and fishing the unoccupied lands of the United States under the authority of the 1868 Fort Bridger Treaty have shaped his conviction to protect our natural resources and the aboriginal rights that are fundamental to our identity as Indian people.

Gaylen regards his tribal hunting and fishing practices as sacred lessons passed on from time immemorial. He is thankful for the generations of strong Indian leaders, attorneys, and firms such as NARF that continue to protect these rights. He hopes that one day his descendants also experience the spiritual connection of hunting buffalo and spearing salmon in their aboriginal territories, just as his ancestors have in perpetuity. Gaylen is a direct descendant of Chief Race Horse, the defendant in Ward v. Race Horse, a nineteenth century precedent case which was rightfully repudiated by the Supreme Court in Herrera v. Wyoming.

After law school, Gaylen hopes to represent tribes in the protection of treaty rights and natural resources, with hopes to further expand tribal sovereignty in Idaho and Indian Country as a whole. He seeks to highlight the important roles that traditional teachings, cultural knowledge, and the strength within tribal communities have in the practice of law.

Thank you to the Confederated Tribes of Siletz Indians and the Siletz Tribal Charitable Contribution Fund for its grant to our Law Clerk Program. This generous and ongoing support allows NARF to mentor Native law students like Gaylen, but it also allows dedicated students to make a direct impact on Indian law and Native people.