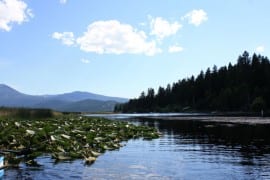 On Wednesday, February 24, 2021, in an order from Klamath County Circuit Court Judge Cameron F. Wogan, the Oregon court again affirmed the Klamath Tribes’ water and treaty rights. Wednesday’s order rejected attacks on the Tribes’ water rights determined by the Oregon Water Resources Department (OWRD) during the administrative phase of the Klamath Basin Adjudication (KBA), affirmed the senior priority date of the Klamath Tribes’ water rights in the Klamath Basin, and upheld the need to maintain a healthy and productive habitat to meet the Tribes’ treaty right to fish, hunt, trap, and gather.

Klamath Tribes Chairman Don Gentry responded to the order, “We are pleased that Judge Wogan upheld the rulings from the administrative phase of the KBA. He reaffirmed that the 1864 treaty entered into between the Klamath Tribes and the United States reserved to the Tribes sufficient water to keep our fisheries and other aquatic resources healthy so that we can protect our natural resources and cultural traditions.”

NARF Staff Attorney Sue Noe explained, “Judge Wogan correctly affirmed quantification of the Tribal water rights based on the habitat needs of the fish, wildlife, and plants. Although he ruled that opponents of the Tribal rights will have another chance to try to reduce the amounts by showing the Tribes don’t need all the water awarded by OWRD to meet their livelihood needs, Judge Wogan made clear in no uncertain terms that the amounts cannot be below what is necessary to provide healthy and productive habitat.”

Importantly, like all other courts that have considered the issue, Judge Wogan ruled that the Klamath Tribes’ water rights extend to Upper Klamath Lake. Upper Klamath Lake forms part of the border of the former Reservation and provides critical habitat for the endangered c’waam and koptu (Lost River and shortnose sucker fish), which are sacred fish species traditionally harvested by the Tribes.

Represented by NARF, the Klamath Tribes successfully achieved recognition of their treaty-reserved water rights in federal court litigation in the 1970s and 1980s in United States v. Adair, but the federal courts left quantification of the water rights to the state adjudication in the KBA. After the successful conclusion of the KBA’s 38-year administrative phase, the Tribes were able to begin enforcing their water rights for the first time in 2013. The administrative determinations are presently on review in the Klamath County Circuit Court and Judge Wogan’s ruling is the latest to come out of that process.