April 25, 2008
Laguna independent filmmaker Jenni Monet will premiere her new film “Losing Ground” that examines the devastating impact of global warming on the Alaska Native Village of Kivalina this weekend in Santa Fe. The short documentary was made in association with NARF and with the support of the Tzo-Nah Fund.
“Losing Ground will provide an important platform and voice for the people of Kivalina to tell their story of the real and imminent threats they are facing due to global warming,” stated NARF Director of Development Don Ragona. “NARF is grateful to Miss Monet and the Tzo-Nah Fund for making this important film possible,” added Ragona.
“Losing Ground” will premiere at 6pm, Sunday, April 20th at the National Tribal Environmental Council (NTEC) and the New Mexico Tourism Department’s inaugural Global Green Indigenous Film Festival. The film festival will be held in conjunction with NTEC’s 15th Environmental Conference April 15-18, 2008.
The premiere of Losing Ground is timely with the filing of a case representing the Alaska Native Village of Kivalina against 24 major corporations that includes ExxonMobil Corp., Peabody Energy Corp., Southern Company, American Electric Power Co. Kivalina faces imminent destruction from global warming due to the melting of sea ice that formerly protected the village from coastal storms during the fall and winter. The diminished sea ice due to global warming has caused a massive erosion problem that threatens the village’s existence and urgently requires the village be relocated.
The lawsuit filed at the end of February by NARF, The Center on Race, Poverty & the Environment and six law firms seeks damages due to the defendant companies’ contributions to global warming and invokes the federal common law of public nuisance. The suit also alleges a conspiracy by some defendants to mislead the public regarding the causes and consequences of global warming.
“Losing Ground” will one of several environmentally-themed films to be shown this weeked at the Global Green Indigenous Film Festival. Both the Film Festival and the conference will be held at the El Museo Cultural de Santa Fe in Santa Fe, New Mexico. 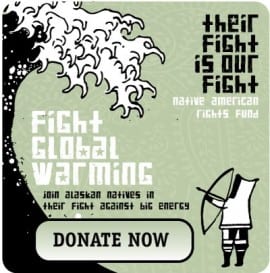