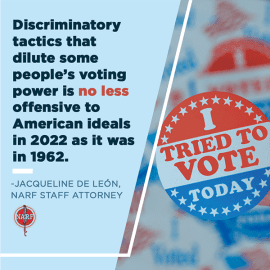 This milestone comes less than a month after the National Congress of American Indians (NCAI), represented by the Native American Rights Fund (NARF), filed an amicus (“friend of the court”) brief in the United States Supreme Court case Merrill v. Milligan (21-1086), which examines whether the proposed Alabama redistricting plan violates Section 2 of the Voting Rights Act (VRA).

The brief provides the Court with an account of the ongoing and critical need for Section 2 of the VRA to safeguard against Native American vote dilution caused by contemporary racial discrimination and voter suppression. This ongoing racial discrimination continues to impact Native Americans’ ability to elect candidates of their choice and robs them of representatives who understand and respect their unique political status and urgent infrastructure needs. The brief details how:

NARF Staff Attorney Jacqueline De León explained, “The lower court in Merrill properly applied Section 2 of the Voting Rights Act, and it is important that the Supreme Court affirms this decision. We see this sort of discrimination happening across Indian Country to this day. Discriminatory tactics that dilute some people’s voting power is no less offensive to American ideals in 2022 as it was in 1962.” 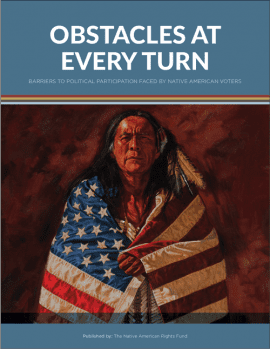 NCAI is a member of the Native American Voting Rights Coalition that produced a 2020 report, Obstacles at Every Turn: Barriers to Political Participation Faced by Native American Voters, documenting widespread, present-day discrimination and impediments to registration and voting.