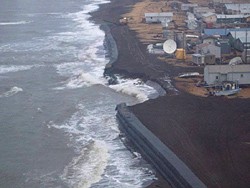 Alaskan Native residents of Kivalina, AK face imminent relocation from their traditional homeland due to impact of global warming on their community. Photo by David Hocs.

KIVALINA, Alaska A tiny and impoverished Alaskan village of Inupiat Eskimos located in the Arctic Circle, Kivalina, filed a lawsuit Tuesday against industrial corporations that emit large quantities of greenhouse gases. Kivalina faces imminent destruction from global warming due to the melting of sea ice that formerly protected the village from coastal storms during the fall and winter. The diminished sea ice due to global warming has caused a massive erosion problem that threatens the village’s existence and urgently requires the village be relocated. The lawsuit was filed on behalf of Kivalina by two non-profit organizations-Native American Rights Fund (NARF) and The Center on Race, Poverty & the Environment- plus six law firms. NARF is a national non-profit legal and advocacy organization for Native American rights that has been based in Boulder, CO for 37 years.

The Native Village of Kivalina, which is a federally recognized Indian Tribe, and the City of Kivalina, which is an Alaskan municipality, filed the lawsuit Tuesday in the United States District Court for the Northern District of California, located in San Francisco.They filed the case on their own behalves and on behalf of all tribal members against defendants ExxonMobil Corp., Peabody Energy Corp., Southern Company, American Electric Power Co., Duke Energy Co, Chevron Corp., and Shell Oil Co., among others. In total there are nine oil company defendants, fourteen electric power company defendants and one coal company defendant. The suit claims damages due to the defendant companies’ contributions to global warming and invokes the federal common law of public nuisance. The suit also alleges a conspiracy by some defendants to mislead the public regarding the causes and consequences of global warming. The residents of Kivalina are among the nation’s poorest people.

Colleen Swan, Tribal Administrator of the Native Village of Kivalina, said “The campaign of deception and denial about global warming must stop.” She added, “Global warming and its effects are a reality we have to deal with. Peoples’ lives are in danger because of it.” Swan noted that “official reports from the U.S. Army Corps of Engineers and the Government Accountability Office have found that Kivalina is directly harmed by global warming and must relocate at an expense that could cost $400 million or more.”

“We need to relocate now before we lose lives,” echoed Janet Mitchell, City Administrator for the City of Kivalina. “We are seeing accelerated erosion because of the loss of sea ice. We normally have ice starting in October, but now we have open water even into December so our island is not protected from the storms.”

The defense of Alaska Native rights has been a long-standing priority for the Colorado-based NARF. The non-profit, with offices also in Anchorage, Alaska and Washington D.C. has represented Alaska Native Tribes for over two decades bringing litigation to protect tribal sovereignty and customary and traditional subsistence practices.

“In recent years it has become evident that another, perhaps more impending threat to Alaska Native lifeways looms,” stated NARF Alaska attorney Heather Kendall-Miller. “Global climate changes are wreaking havoc on the Arctic causing loss of habitat and widespread erosion. Subsistence practices, too, are being threatened. Upon learning that many villages along Alaska’s coastline were eroding into the ocean necessitating relocation, NARF’s Alaska office took on the challenge of developing new litigation that would seek compensation from industry polluters for the cost of village relocation.”

Kendall-Miller further added that, “Working with the environmental public interest firm, Center on Race, Poverty & the Environment, NARF reached out to the private bar to establish a team of top notch attorneys to develop the first climate change case that seeks damages from industry for the loss of property due to global warming. While the private firm attorneys bring the workforce and tort experience to the case, NARF brings the client and the relationship. Together this coalition of law firms hope to establish the climate change equivalent of the tobacco cases.”