NARF Attorneys among “The First Thirteen” 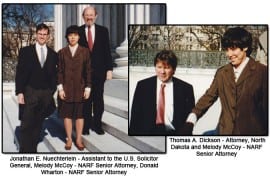 NARF Attorneys among “The First Thirteen”

The First Thirteen Native attorneys who argued before the U.S. Supreme Court will be coming together to discuss their experiences in a symposium on Friday, March 16, 2012, at the University of New Mexico School of Law in Albuquerque, NM. Native American Rights Fund (NARF) Senior Staff Attorneys Melody McCoy and Heather Kendall Miller are two of the thirteen. (Two others of the 13, Arlinda Locklear and Jeanne Whiting, were NARF attorneys at the time of their arguments. Two more, Terry Pechota and Ray Cross, had been NARF attorneys prior to making their arguments.)

The symposium will begin with Rodney Lewis who argued the Central Machinery Co. v. Arizona Tax Commission case in 1980 and continue through James Anaya who argued Nevada v. Hicks in 2001, a case in which NARF also represented a party. Instead of the more usual lecture format, Dale White (California v. U.S., 1989) will sit down with several of these attorneys at a time to have a conversation about their preparations, the day itself, and its impact on their careers and on Federal Indian Law.

This historic event will be sponsored by the American Indian Law Center, Inc. (AILC), UNM’s Law and Indigenous Peoples Program, the Indian Legal Program at ASU’s Sandra Day O’Connor College of Law, and the New Mexico Indian Bar Association. In addition, the NM Indian Bar Association will host a reception on Thursday evening before the event to honor the thirteen ground-breaking attorneys.

Proceeds from the symposium will benefit the Pre-Law Summer Institute (PLSI). PLSI, which the AILC has been running since 1967, is an intensive two-month program which prepares American Indian and Alaska Native individuals for the rigors of law school by essentially replicating the first semester of law school. Likened to boot camp by many former participants, the PLSI concentrates its content into eight weeks of instruction, research and study, teaching students the unique methods of law school research, analysis, and writing.

The NARF Cases
In January, 1997, Melody McCoy argued that tribal civil jurisdiction should extend to the actions of everyone who comes within tribal territory, whether they are Native American or not. The case, Strate v. A-1 Contractors, involved a car accident on a state highway that is on a federal right-of-way crossing federal Indian trust land in North Dakota. Neither motorist was Indian, but one driver was a resident of the reservation, and had adult children who were members of the tribe. NARF argued that tribal courts should have jurisdiction along with state courts over motor vehicle torts that threaten the reservation community, even if they occur on state highways. Relying heavily on an earlier case, Montana v. United States, the Supreme Court ruled that the tribal court lacked jurisdiction. Montana established that for jurisdiction over non-Indians within reservations but on non-Indian land, there must either be a consensual relationship or a direct threat to the tribe’s political integrity, economic security, health or welfare.

Heather Kendall-Miller represented the respondent, the Native Village of Venetie, in Alaska v. Native Village of Venetie Tribal Government, which she argued in 1998. The local tribal council in Venetie, Alaska, sought to tax tax from non-tribal members doing business on tribal lands. The Court decided unanimously that the land was not Indian country under the Alaska Native Claims Settlement Act of 1971, and therefore the Tribe lacked jurisdiction to impose the tax. (The State of Alaska, the petitioner, was represented by John G. Roberts, who later became the Chief Justice of the United States.)

Melody McCoy joined the Native American Rights Fund as a staff attorney in 1986. At NARF, Melody works primarily in the areas of tribal jurisdiction, tribal education rights, tribal trust funds, and tribal intellectual property rights. She received her undergraduate degree from Harvard University (1981) and law degree from the University of Michigan (1986). Melody is admitted to practice law in Colorado and Massachusetts. She is an enrolled member of the Cherokee Nation of Oklahoma.