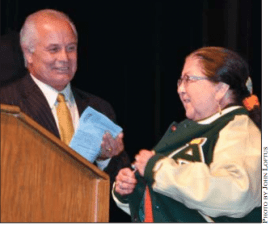 The Auburn School District in Washington State recently selected NARF Board Member Virginia Cross for induction into the Auburn High School Hall of Fame, only the sixth person in the school’s 106-year history to be accorded this honor.

Virginia served as Director of Indian Education for the Auburn School District for 22 years, actively shaping many programs for Native American students in Washington State.  She has also served on the Muckleshoot Tribal Council for over three decades.  The Virginia Cross Native American Education Center, operated by the Auburn School District in partnership with the Muckleshoot Tribe, was named in her honor.

Virginia joins a small but accomplished group that includes a winner of the Presidential Medal of Freedom, an astronaut, and Washington’s current governor.  In nominating her for this honor, the school district wrote the following: “From humble beginnings in the South Auburn portion of the Muckleshoot Reservation, Virginia Cross has risen to become a true leader.  She has opened doors for Native people that had been closed for generations.  She has met numerous U.S. Presidents and regularly works for the betterment of her people with United States senators, congressmen, governors, legislators, mayors and other elected leaders.”

To learn more about Virginia and her recent honor, click here.