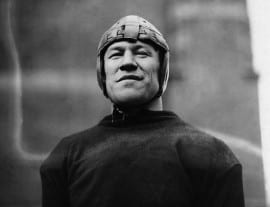 Today—May 28—is Jim Thorpe’s birthday.  For nearly 60 years, the sons of American sports legend Jim Thorpe have been trying to return his remains to his birthplace – the Sac and Fox Nation in Oklahoma – so he can finally be laid to rest in the lands of his people as he wished. It’s time to bring Jim Thorpe home from being a tourist attraction in the Borough of Jim Thorpe Borough, Pennsylvania. Please support our work today with the Sac and Fox Nation and the Thorpe sons, and join us in standing up for the rights of Native Americans – and all Americans.  And, please share this message with your friends and family.  You can find us on Facebook and Twitter.  #BringJimThorpeHome.

Jim Thorpe, given his Indian name Wa-tha-huk (Light after the Lightning or Bright Path) by the Thunder Clan of Black Hawk, was voted Greatest Athlete of the 20th Century in a poll taken by ABC’s Wide World of Sports in 2000, beating out 14 other athletes including Muhammad Ali, Babe Ruth, Jesse Owens, Wayne Gretzky, Jack Nicklaus, and Michael Jordan. His remarkable accomplishments in the 1912 Olympics, winning gold medals in the decathlon and pentathlon, were matched by his skills in professional baseball (1913-19) and professional football (1917-29). In 1920, Jim Thorpe was selected as the first president of the American Professional Football Association, which became the National Football League in 1922, and he was an inaugural inductee of the Pro-Football Hall of Fame.

Following his death in 1953, Jim Thorpe’s estranged third wife, Patsy, stormed in with state police during his traditional tribal burial ceremony at the Sac and Fox Nation and seized his remains. The tribal rituals were never completed, and Jim Thorpe’s spirit could not complete its journey.  For nearly a year, Patsy hauled his remains around the country, seeking the highest bidder to meet her demands.  Two small coal-mining towns in eastern Pennsylvania that had hit upon hard times were willing to strike a deal, even though they had no affiliation or history with Jim Thorpe or his family. But with aspirations of becoming a thriving tourist destination, the two towns merged to form the Borough of Jim Thorpe with plans to establish a football shrine, an Olympic stadium, and a Thorpe-branded sporting goods factory. Patsy envisioned her own tourist hotel to be called “Jim Thorpe’s Teepees.” Patsy got paid, handed over his remains, and the borough built an above-ground mausoleum to hold his body. Inflicting further injury upon the devastating harm already done, the borough staged a mock Native American ceremony, placed his remains in the mausoleum, and opened for business – which never materialized!

Jim Thorpe wished to be laid to rest on his tribal lands in Oklahoma. Instead, his remains were sold to a town he’d never even laid eyes on. Why do the religious and cultural traditions of Native Americans continue to be disrespected? This is a story of fairness, equality and justice. And it’s time to Bring Jim Thorpe Home.