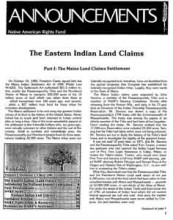 To celebrate our 45th Anniversary this year we’ll be highlighting important moments in NARF history.

On October 10, 1980, President Carter signed into law the Maine Indian Settlement Act of 1980 (Public Law 96-420). The Settlement Act authorized $81.5 million to, first, enable the Passamaquoddy Tribe and the Penobscot Nation of Maine to reacquire 300,000 acres of the 12 million acres of land which was taken from them in ratified transactions over 160 years ago; and second, establish a $27 million trust fund for these tribes for economic development. NARF attorney Robert Pelcyger was asked  to assist in evaluating the tribe’s claims.

On November 23, 1980, President Carter signed a bill settling the claim of the Pamunkey Tribe of Virginia against a railroad company in trespass since 1855. Under the Act, the company was ordered to pay $100,000 In damages to the tribe for past trespasses and an annual rental to commence in 1989. The tribe first approached NARF in 1973 about assisting it in boundary disputes with non-Indians whose property adjoins the reservation.

In 1981, the Native American Rights Fund introduced the first nine members of the newly-established National Support Committee. The purpose of the Committee was to help expand NARF’s fund raising efforts into new areas and sources. Each of these volunteer committee members previously demonstrated a concern for the conditions and rights of disadvantaged and minority groups and supported NARF’s work on behalf of this country’s Native Americans.

Read more in the May 1981 Native American Rights Fund — Announcements.