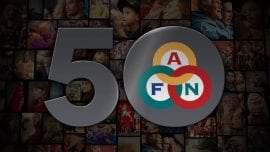 Last month, at their 50th annual convention, the Alaska Federation of Natives (AFN) named NARF client Mike Toyukak their Citizen of the Year.  Toyukak was the lead plaintiff in the case Toyukak v. Treadwell.

On July 19, 2013, NARF and co-counsel Morgan, Lewis & Bockius LLP and Armstrong Teasdale LLP, acting on behalf of two tribal councils and two Alaska Native voters, filed suit in federal court charging state elections officials with ongoing violations of the federal Voting Rights Act and the United States Constitution. The suit claimed state officials failed to provide oral language assistance to citizens whose first language is Yup’ik, the primary language of many Alaska Natives in the Dillingham and Wade Hampton regions.  Trial was held from June 23 to July 3, 2014 and the court rendered an oral decision on September 3, 2014.  The court held that the defendants had violated Section 203 of the Voting Rights Act in all the census areas at issue.

After months of negotiations, on September 30, 2015, the court approved a settlement agreement with the defendants that provided for the establishment of a comprehensive language assistance program.  NARF Attorney Natalie Landreth explained that the settlement opened “the door for Alaska Native access to the polls in a way that we have not seen before.” (Learn more about the case at the NARF website.)

NARF extends congratulations to Mr. Toyukak for this well-deserved recognition!