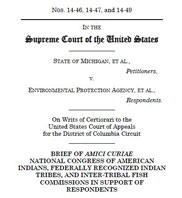 In this case, the U.S. Supreme Court granted certiorari to consider whether the Environmental Protection Agency (EPA) unreasonably declined to consider costs of regulation in deciding whether to regulate hazardous air pollutants (including mercury emissions) emitted by electric utility steam generating units (EGUs). The U.S. Court of Appeals for the D.C. Circuit concluded that it was reasonable for EPA not to consider costs in deciding to regulate EGUs under the Clean Air Act, but petitioners argue that the statute requires EPA to consider costs—and, specifically, to weigh the costs against the benefits of regulation—before deciding whether to regulate.  In attacking EPA’s decision, petitioners repeatedly disparaged the benefits of the EPA rule (known as the Mercury and Air Toxics Standards or “MATS” Rule), describing the benefits of the rule as “minimal,” “negligible,” and “de minimis.”

NCAI, the Great Lakes Intertribal Fish and Wildlife Commission, the Colombia River Intertribal Fish Commission, and the tribes listed above filed an amicus brief in support of the EPA.  Tribal amici are uniquely positioned to explain to the court the substantial benefits of the MATS Rule based on the fact that American Indians are perhaps more adversely impacted by mercury emissions than any other subpopulation in the United States.  Many American Indians consume fish at far higher rates than the general population (in some instances, up to 4 or 5 times as high) and, as a result, American Indians are disproportionately impacted by mercury emissions. The emissions harm Indian health, putting tribal members at unusually high risk for neurodevelopmental disorders, cardiovascular disease, autoimmune deficiencies, and other adverse health effects from methylmercury exposure.  In addition, mercury emissions harm Indian culture, threatening longstanding traditions of fishing and fish consumption that are central to many tribes’ cultural identity.  Finally, mercury emissions harm Indian subsistence, contaminating food sources that many tribal members depend on for survival.

Download the brief to learn more about this case.