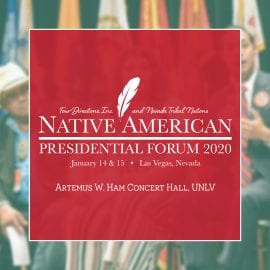 The Native American Rights Fund is proud to co-host the Four Directions and Nevada Tribes Native American Presidential Forum. In addition to co-hosting, NARF Executive Director John Echohawk (Pawnee) will participate in the forum as a panelist. Mr. Echohawk expressed his support for the forums, “Native voters consistently are ignored and excluded from state and federal political processes. The Native American Rights Fund is proud to be part of the movement to tear down that tradition of discrimination. Only with an inclusive and representative government can justice be served. These national forums are a first step in having Native voices heard and Native issues addressed.”

Tribal leaders from across Indian Country will serve as panelists when presidential candidates take the stage during a two-day forum at the Artemus W. Ham Concert Hall on the University of Nevada Las Vegas campus in Las Vegas, Nevada, on January 14 and 15, 2020.

Concurrent with the forum, organizers will provide training for Native Americans living in Nevada on participation in Nevada’s presidential primary caucuses.

The livestream link for the event will be available at www.NativeVote2020.com .