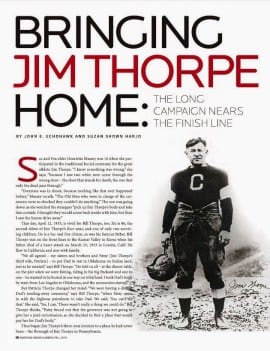 Late last year, NARF filed an amicus curiae brief on behalf of the National Congress of American Indians (NCAI) in the Jim Thorpe case.  The Thorpe family and the Sac and Fox Nation filed suit to repatriate Jim Thorpe’s remains so that he could be buried in Oklahoma on tribal land, as was his wish.  The Thorpe family and Tribe obtained a ruling in federal district court that NAGPRA applies to the Borough of Jim Thorpe in Pennsylvania, where Thorpe’s remains are in a mausoleum.  The Borough appealed that decision.  NARF, representing NCAI, filed an amicus brief in support of the lower court’s decision.  NARF also defended the constitutionality of NAGPRA, which the Borough challenged for the first time on appeal.

To read John and Suzan’s article, click here and click through to page 62.  To read NARF’s amicus brief and learn more about the issue, click here.