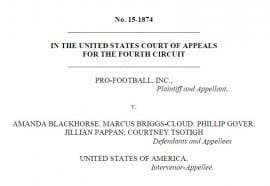 NARF co-authored the brief on behalf of over forty Native American organizations who oppose the Washington NFL football team’s attempt to revive its trademark registrations after the Trademark Trial and Appeal Board ruled in June 2014 that the name ran afoul of the Lanham Act’s Section 2(a), which bars registration of marks that are “disparaging” to a group of people.

NARF has long opposed the name used by the Washington NFL football team.  For over twenty years, NARF has publicly denounced use of the name, supporting and participating directly in various legislative and litigation efforts to put an end to use of this offensive name.  “Race-based stereotyping and behaviors in sports persist today,” John Echohawk, NARF’s Executive Director has said.  “NARF has long worked, and will continue to work, to put an end to this racial slur masquerading as a team name.”

Read a copy of the brief.