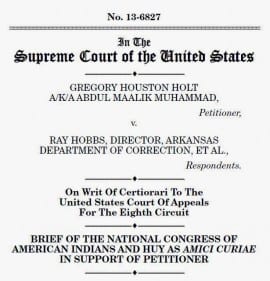 On May 29, NARF filed an amicus brief with the United States Supreme Court on behalf of the National Congress of American Indians (NCAI) and Huy in Holt v. Hobbs, a case that will likely impact the claims of Native prisoners throughout the country.  The filing of this brief is part of an ongoing effort by NARF, NCAI, and Huy to secure religious liberties for Native prisoners.

Holt involves a Muslim prisoner in Arkansas seeking review of a prisoner grooming policy that prevents him from wearing a half-inch beard consistent with his religion.  Like Mr. Holt, many Native inmates are unduly restricted by prison grooming policies when seeking to wear long hair consistent with their traditional religion, and a group of Native inmates from Alabama recently sought the Court’s review in Knight v. Thompson, a case very similar to Holt.  Arkansas and Alabama are among a small minority of states still adhering to antiquated, restrictive policies that do not provide religious exceptions, even though the Federal Bureau of Prisons, at least 38 states, and the District of Columbia accommodate the Native religious practice of wearing long hair without incident.

To read the brief, click here.  And, to learn more about NARF’s ongoing efforts with NCAI and Huy to work to secure religious liberties for Native prisoners, click here for a recent article in Indian Country Today.