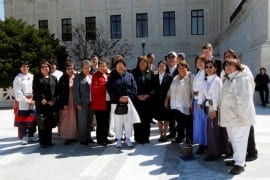 Ronnie and Lila Long with NARF attorneys Melody McCoy and Richard Guest and members of the Sacred Circle National Resource Center to End Violence against Native Women outside the Supreme Court after the oral argument. Photo by Marsha Miller

WASHINGTON D.C.-On Monday April 14, 2008, the United States Supreme Court heard oral argument in Plains Commerce Bank v. Long Family Land and Cattle Company, one of the most significant Indian law cases to reach the Court in the past decade. As Chief Justice John Roberts recognized during the argument, “[If we rule in favor of the Long Family], this would be the first case in which we have … allowed Indian tribal jurisdiction to be asserted over a nonmember [defendant in tribal court].” “It’s a big ‘IF’,” commented John Echohawk, Executive Director of NARF which is co-counsel for Ronnie and Lila Long, tribal members who operate a cattle ranch on the Cheyenne River Sioux Reservation in South Dakota… “But in this case,” continued Echohawk, “we have a chance.”
Ronnie and Lila Long joined a packed courtroom to watch the Bank argue that the law requires nonmembers to consent expressly to tribal court jurisdiction. But as the Longs countered, for many years, the Bank made multiple loans-with Bureau of Indian Affairs guarantees — to the Long Company, a majority-Indian-owned corporation. In 1996, the Bank restructured, changed the terms, and refused to provide some of the Company’s loans. As a result, hundreds of the Longs’ cattle died during the harsh winter of 1996-97, and the Bank sought to evict the Longs from some of their remaining land. A two-day jury trial in Tribal Court resulted in a judgment of $750,000 against the Bank. This judgment and the Tribal Court’s jurisdiction were upheld by the Tribal Court of Appeals, the federal district court, and the federal appeals court.
The Longs’ Supreme Court position was argued by NARF’s co-counsel, David Frederick, a veteran Supreme Court practitioner who co-chairs the University of Texas Law School Supreme Court Clinic. The argument was the culmination of over three months of intensive preparation and advocacy by a team of attorneys, law professors, and law students assembled by NARF and the Tribal Supreme Court Project to represent the Longs and their supporting amici curiae, including the National Congress of American Indians, the Cheyenne River Sioux Tribe and the National American Indian Court Judges Association. The United States as amicus also sided with the Longs although nine states as amici sided with the Bank. “We are very grateful,” said Ronnie Long. “The attorneys came to our Reservation, saw the little bit of land and few cattle we have left, and dug into this case night and day for weeks on end. I still can’t believe it.”
After the oral argument, NARF is “cautiously optimistic.” “If ever there was a case where the Court should uphold tribal court jurisdiction, this is it” explained Melody McCoy, a senior staff attorney at NARF. “But will the Court do so? I don’t know. It’s been almost 20 years since the Court has found any tribal jurisdiction over non-Indians.” Nevertheless, at least some members of the Court seemed willing to say that based on the facts of this case, there is tribal court jurisdiction. The Court’s decision is expected by the end of June 2008.
To Read More on This Story See Article “Supreme Court takes up tribal jurisdication case” on Indianz.com
More blog posts