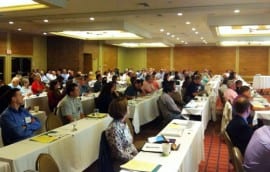 Globally, an estimated 884 million people lack access to safe drinking water. In the United States, only 0.6% of the population lacks Access to drinking water and wastewater disposal. But disproportionately, 13% of American Indians lack that access—some 20 times the national average.

NARF has been engaged in litigating and negotiating water rights for tribes for decades, and water law comprises a significant portion of our case load. In Winters v. United States, the right to water was impliedly reserved for the resident tribes with the creation of their reservations. The quantity of Indian water rights is measured by the amount of water needed to fulfill the present and future needs of the reservation – cultural, domestic, municipal, commercial, industrial and agricultural.

U.S. Senator Jon Tester recognizes the value of negotiated water settlements, and greeted the Symposium participants with this message:

“We’re already seeing the benefits of water settlements in Montana—like jobs and stronger infrastructure. But our work is not done. In addition to the Crow Water Settlement, which passed last year, I continue fighting to get the resources necessary to build authorized projects at Rocky Boy and Fort Peck. We’re also looking for opportunities to advance settlements on the Fort Belknap and Blackfeet reservations.”

This year’s session topics included: Negotiation of Indian Water Rights Claims – the Basics; Settlement Implementation – the Administration’s Settlement Policy; and Settlement Legislation – Getting Bills through Congress. The primary Symposium format consists of panel discussions with presenters who have been involved in negotiated settlements representing tribal, state, local, and federal governments, interest groups, congressional staff, and others. The Symposium schedule provided opportunities for informal interchange and cultural enlightenment. A main feature of the Symposium is always a tour of a local Indian community that highlights a recent settlement’s benefits. This year’s field trip toured the Crow Reservation and concluded with an evening social and cultural event hosted by the Crow Tribe.