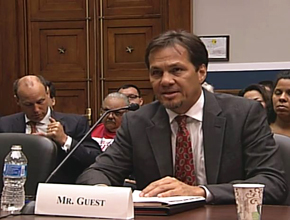 Recently, NARF Staff Attorney Richard Guest testified before the U.S. House of Representatives Subcommittee on Health, Education, Labor & Pensions at a hearing on H. 511, the Tribal Labor Sovereignty Act of 2015.  This legislation would clarify the rights of Indians and Indian tribes on Indian lands under the National Labor Relations Act (NLRA).  As Richard noted, the purpose of his testimony was “to demonstrate that, in furtherance of its longstanding policies of Indian self-determination, tribal self-governance, and tribal economic self-sufficiency, it is time for Congress to provide parity for tribal governments under the NLRA.”  He went on to say that, “[i]n this context, parity encompasses the quality of being treated equally under the law alongside federal, state, and local governments.  Tribal governments are entitled to the same freedom to choose the appropriate time, place, and manner for regulating union activity on Indian lands and collective bargaining for its employees.”

A video of the hearing is available online, as is a copy of Richard’s written testimony.