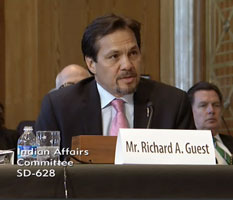 Yesterday, NARF Staff Attorney Richard Guest testified before the Senate Committee on Indian Affairs at a hearing on S. 248, the “Tribal Labor Sovereignty Act of 2015,” which clarifies the rights of tribal governments under the National Labor Relations Act (NLRA). Richard testified that “in furtherance of its longstanding policies of Indian self-determination, tribal self- governance and tribal economic self-sufficiency, it is time for Congress to provide parity for tribal governments under the NLRA. In this context, parity encompasses the quality of being treated equally under the law alongside Federal and State governments.”

A full copy of Richard’s testimony is available on the Senate website as is a video of the hearing.