The comment period for Bears Ears National Monument and other national monuments ended on July 10.  More than 1.3 million comments were submitted! NARF would like to thank all of you who took the time to speak up and stand firm against corporate interests.

We invite you to read the comment submitted by the coalition of tribes who have long-standing historical, cultural, and spiritual ties to the land known as Bears Ears.

In his interim report to President Trump, Interior Secretary Ryan Zinke recommended that the president revise the existing boundaries of the Bears Ears National Monument at the completion of the 120-day monument review.  The announcement does not change the tribes’ view that monuments cannot be revoked or diminished by the president. It does not matter whether the decision is now or later. The only correct decision is to keep Bears Ears AS-IS. 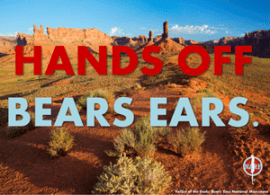 The five tribes whose members continue to use the Monument for cultural and religious purposes to this day (Navajo Nation, Hopi Tribe, Zuni Tribe, Uintah and Ouray Ute, and Ute Mountain Ute Tribe) led the effort to establish the Bears Ears National Monument. Increased looting of the estimated 100,000 plus structures, sites, and objects within every reach of the monument dictated the need for protections in the form of a monument designation. The Bears Ears Monument was established after years of careful and detailed fact-finding accompanied by a lengthy and open public commenting process. The openness of the process to designate this monument was unprecedented.

“Bears Ears has been targeted because it holds resource potential that the oil & gas industry wants to access.  Opening the monument to development will threaten cultural and natural resources that can never be replaced,” said Native American Rights Fund Staff Attorney Natalie Landreth. “Our national parks, public lands and waters protect a shared history and culture that are worth more than the minerals beneath them. “

There is no authority, statutory or otherwise, for the gathering of public comments on monuments already established. It’s a completely made-up process to make a diminishment or revocation look “open.” Ms. Landreth explains, “Only Congress has the power to dispose of federal property, and they have delegated to the President ONLY the authority to establish monuments. He has no power to do otherwise, so this review process is pointless.”

Bears Ears was singled out for a ridiculously short fifteen-day comment period.  Despite this, there were more than 1,000,000 comments received, including petitions, and they overwhelmingly support maintaining Bears Ears (with 99% of comments expressing support for the monuments).

If you would like to learn more about the threat to the Bears Ears National Monument, please visit our website.