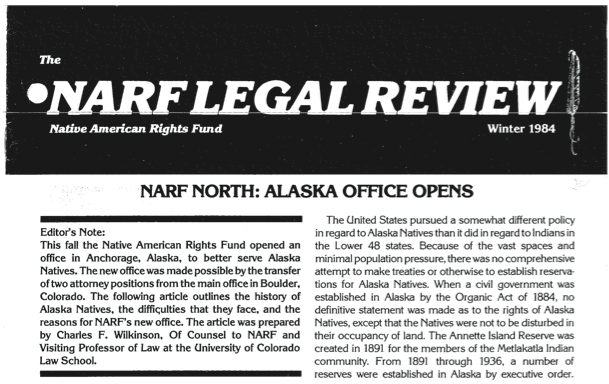 Thirty years ago this week, NARF’s Alaska office opened its doors!  In fall of 1984, NARF’s Board of Directors determined there was a serious need by tribes in the state of Alaska for legal aid on issues of sovereignty, subsistence, and child welfare.  The decision was made to dispatch two attorneys from NARF’s Colorado office to the Last Frontier.  On October 1, 1984, NARF staff attorneys Lare Aschenbrenner and Robert Anderson opened the doors of the Alaska office.  Thirty years later, NARF’s Alaska office continues to represent Alaska Native Tribes on issues core to their continued existence.  To read the NARF Legal Review from 1984 announcing the opening of NARF Alaska, click here.