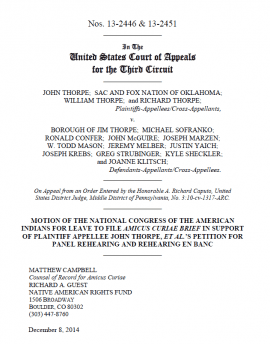 As described in a previous post on the NARF blog, the Thorpe family and the Sac and Fox Nation filed suit to repatriate Jim Thorpe’s remains so that he could be buried in Oklahoma on tribal land, as was his wish.  The Thorpe family and Tribe obtained a ruling in federal district court that NAGPRA applies to the Borough of Jim Thorpe in Pennsylvania, where Thorpe’s remains are in a mausoleum.

On October 23, 2014, a panel of the Third Circuit Court of Appeals ruled, that NAGPRA as written applies to the Borough, but that applying in this case would produce an absurd result demonstrably at odds with the intentions of Congress.  The panel was not exactly clear what it saw as “absurd” but also ruled that NAGPRA was only meant to apply to original burial locations or final resting places.