John Echohawk, Executive Director of the Native American Rights Fund (NARF), announced the receipt of a $3 million contribution last week, the largest single donation in its over 40-year history. The donation, from the Nez Perce Tribe of Idaho, was given in recognition of NARF’s work on behalf of the Tribe in its trust fund lawsuit against the United States government. The suit, filed in 2006, sought historical accountings of the Tribe’s funds and assets held in trust by the government. The Nez Perce Tribe was one of over 100 tribes to file such claims, more than 40 of which were represented by NARF.

The Department of the Interior, represented by the Department of Justice and under the direction and leadership of President Barack Obama, late last year chose to settle the lawsuits rather than take them to trial. In April this year the Administration announced settlements totaling more than $1 billion for over 40 tribes. Several more settlements have been reached since. 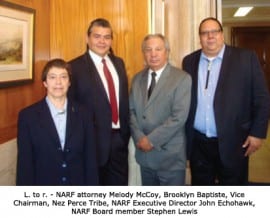 ﻿The settlements help avoid years of difficult litigation between the tribes and the United States. In a statement, the Nez Perce Tribe credited NARF for the historic achievement:

NARF Senior Attorney Melody McCoy (Cherokee) led the tribal trust cases legal fight. “Large cases like this can be overwhelming, but once the government opted to seek a settlement, the pieces began to fall in place. It has been a privilege working with the Nez Perce Tribe since they stepped up to be the lead plaintiff in a case with over 40 tribes. We are grateful for their generous donation and their kind words of appreciation.”

The Native American Rights Fund (NARF) is the oldest and largest nonprofit law firm dedicated to asserting and defending the rights of Indian tribes, organizations and individuals nationwide. NARF’s practice is concentrated in five key areas: the preservation of tribal existence; the protection of tribal natural resources; the promotion of Native American human rights; the accountability of governments to Native Americans; and the development of Indian law and educating the public about Indian rights, laws, and issues. For more information, please contact Morgan O’Brien, (303) 447-8760.