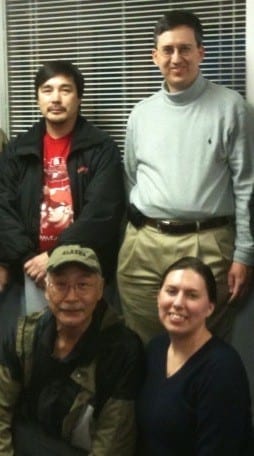 ANCHORAGE — On Tuesday, November 6, four Alaska Natives and four tribal governments represented by the Native American Rights Fund (NARF) and the American Civil Liberties Union (ACLU) requested that a federal court in Washington, D.C. allow them to join Eric Holder, Attorney General of the United States, in defending the constitutionality of provisions of the Voting Rights Act challenged by the State of Alaska. The case is Alaska v. Holder.

Since 1975, Alaska has been one of just three states covered in its entirety by Section 4(f)(4) of the Voting Rights Act. That provision applies to Alaska because on the coverage date, more than five percent of its voting-age citizens were Alaska Natives, the State conducted English-only elections, and less than 50 percent of eligible citizens either were not registered to vote or did not vote. Because of its coverage under Section 4(f)(4), Alaska is required to provide all voting information statewide in Alaska Native languages at every stage of the voting process from registration through casting a ballot. Alaska also is required to comply with Section 5 of the Act, which requires the State to show that any change in its voting policies or procedures does not have either the purpose or the effect of discriminating against minority voters.

In 2006, Congress reauthorized Sections 4(f)(4) and 5 of the Voting Rights Act for an additional 25 years. Congress extended those provisions under its broad enforcement powers to protect the right to vote under the Fourteenth and Fifteenth Amendments to the United States Constitution. In exercising its broad authority, Congress held nearly two dozen hearings with nearly 100 witnesses in 2005 and 2006. Three of the attorneys representing the Alaska Native voters and tribes, Natalie Landreth, Laughlin McDonald, and Dr. James Thomas Tucker, were among the witnesses who presented evidence of the continuing need among voters, including Alaska Natives, for the Act’s protection from discrimination in voting and other areas including education that impact the right to vote.

During the reauthorization debate, then-Lieutenant Governor Loren Leman opposed the continued coverage of Alaska, claiming that the State was in full compliance with the Voting Rights Act.
However, a federal court disagreed. On July 31, 2008, United States District Judge Timothy Burgess issued a landmark injunction finding that Alaska’s Division of Elections had done little to provide Yup’ik- speaking voters in the Bethel region with equal opportunities to participate in the voting process through their failure to provide voting information in Yup’ik and denying election-day help from the person of the voter’s choice. In 2009, the Attorney General of the United States relied upon Judge Burgess’s findings and evidence of ongoing voting discrimination in violation of the federal Constitution to certify the Bethel Region for federal observers. Those federal observers help identify and document the State’s violations of federal law.

Among the four individual Alaska Native voters, Anna Nick was the lead plaintiff in Nick et al. v. Bethel et al. and established the State’s violations of the language and voter assistance provisions of the Voting Rights Act. Willie Kasayulie was the lead plaintiff in Kasayulie v. State of Alaska, and established that Alaska’s history and practice of unequal funding for schools in Alaska Native villages violated federal and state law; the State settled the case last year after it agreed to provide $146 million for five rural school construction projects. Mike Williams is a registered voter and member of the Tribal Council of the Akiak Native Community. Vicki Otte is a registered voter who lives in Anchorage, former redistricting board member and long-time advocate of protecting the Native vote.

The four federally recognized tribal governments represent hundreds of registered Alaska Native voters throughout Alaska who have benefited from the Act’s protection of their fundamental right to vote. Kasigluk Traditional Council is in the Bethel region of Alaska and was a plaintiff in the Nick litigation. Emmonak Tribal Council is located in the Wade Hampton region and is one of the Alaska Native villages impacted by the Kasayulie litigation. Togiak Traditional Council is located in the Dillingham region. Levelock Village Council is in the Lake and Peninsula Borough.

“The four Alaska Natives and four tribal governments represent a cross-section of voters who continue to face barriers to voting as a result of the State’s neglect, unequal treatment, and violations of the law,” said NARF attorney Natalie Landreth, who is lead co-counsel for the voters seeking to intervene in the federal lawsuit. “State officials have shown they will not comply with the law until a court orders them to do so, or they face the threat of a lawsuit,” Landreth noted. “For example, they failed to implement Section 203 of the VRA for more than 35 years before the Nick case.” Landreth continued, “The Nick lawsuit, which established voting rights violations, was settled in 2010 with continuing oversight through this year. The Kasayulie lawsuit was only just settled last year. Discrimination in Alaska is not a thing of the past, and federal oversight of Alaska’s elections is no accident.”

Jeffrey Mittman, Executive Director of the ACLU of Alaska, agreed. “Voting is a fundamental right and central to the proper functioning of our democracy. We cannot allow to stand efforts by any State official to weaken voting protections.” Mittman explained, “Alaska Natives have had to bring costly lawsuits that have lasted many years to get the State to comply with federal and state law in areas such as voting and education. Their hard-fought victories have resulted in progress; but that progress is fragile and will quickly be undone without the full protections of the Voting Rights Act.” According to Mittman, “Congress had extensive evidence, which has been confirmed by successful litigation since 2006, that shows its decision to continue to apply Sections 4(f)(4) and 5 to Alaska was a reasonable exercise of its broad authority under the federal Constitution.” Laughlin McDonald, of the ACLU Voting Rights Project in Atlanta added, “The VRA is the crown jewel among civil rights laws. Without it, there would be a significant decline in minority political participation.”

One of the would-be intervenors, Mike Williams of Akiak, said “we decided to join this lawsuit because if you don’t raise your voices, they will not be heard. This court in Washington, DC needs to hear directly from us, the voters, about how important the Voting Rights Act is to us. If the State of Alaska thought we were going to sit this one out, they were sorely mistaken.”

Attorneys for the Alaska Natives are Landreth and Erin Dougherty of NARF, Thomas Stenson of the ACLU of Alaska, Laughlin McDonald of the national ACLU Voting Rights Project, and Dr. James Thomas Tucker, of Lewis Brisbois Bisgaard and Smith LLP.

More information about the ACLU’s work on voting rights is available at: www.votingrights.org