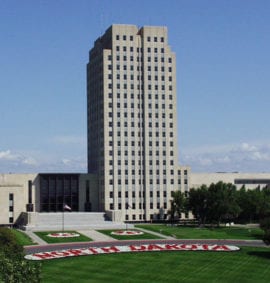 On April 24, 2017, North Dakota Governor Doug Burgum signed House Bill 1369.  This restrictive voter ID law continues to put North Dakota beyond the norms of voter ID laws and violates the constitutional rights of the state’s citizens. Just like North Dakota’s previous law, which was found unconstitutional by a federal court last year, this law makes it harder for some citizens—specifically Native American citizens—to exercise their right to vote.

“The North Dakota legislature had an opportunity to address the real problem with voting in the state—voter disenfranchisement. Instead, it continues to chase the ghosts of illegal voters, an imagined problem that doesn’t really exist. In the course of litigation and in the three consecutive legislative sessions where voting bills have been considered, there has simply been no demonstration that people are casting illegal ballots,” said NARF Staff Attorney Joel West Williams.

North Dakota has had a voter ID law since 2004.  For years, the law functioned without issue.  During that time, the law required voters to show identification, but allowed a voter without ID to cast a ballot if either:

In 2013, the North Dakota legislature greatly narrowed the law by restricting the acceptable forms of ID and eliminating the voucher and affidavit fail-safes. The following session, the legislature amended the law again to even further restrict the forms of acceptable ID.

In 2016, eight Native Americans filed suit to block the voter ID law, alleging that it disenfranchised Native American voters and violated both state and federal constitutions as well as the Voting Rights Act.

How did the voter ID law disenfranchise Native American voters?

The voter ID law required qualified electors to submit one of four forms of ID, which must contain name, residential address, and date of birth. While North Dakota claims that tribal IDs qualify under its law, most tribal IDs do not have a residential address printed on them.  This is due, in part, to the fact that the U.S. postal service does not provide residential delivery in these rural Indian communities.  Thus, most tribal members use a PO Box.  If a tribal ID has an address, it is typically the PO Box address, which does not satisfy North Dakota’s restrictive voter ID law. In both the primary and general election in 2014, many qualified North Dakota tribal electors were disenfranchised because they only had a tribal ID.

“Those that argue that people must present ID to buy alcohol or cigarettes miss a crucial point. Voting is a fundamental, constitutionally protected right. In order for the government to burden that fundamental right, it needs to demonstrate a compelling reason. Here, the Secretary of State and the legislature have done a lot of speculation, but haven’t demonstrated why it’s necessary to take action that disenfranchises Native American voters,” observed NARF Staff Attorney Matthew Campbell.

Was there a good reason for making the recent changes to the law?

No. In making the changes, the legislature cited the need to eliminate voter fraud, but illegal voting has never been a problem in the state. In fact, Secretary of State Alvin Jaeger declared in a 2006 letter, “[D]uring my fourteen years as Secretary of State and the state’s chief election officer, my office has not referred any cases of voter fraud to the United States Attorney, the North Dakota Attorney General, or to local prosecutors. We haven’t had any to refer.”

What did the courts say in last year’s case?

Months before the November 2016 election, Judge Hovland of the U.S. District Court, ND, found the law violated the U.S. Constitution and required the state to provide a fail-safe mechanism for the 2016 general election. Judge Daniel L. Hovland wrote, “it is clear that a safety net is needed for those voters who simply cannot obtain a qualifying voter ID with reasonable effort.” Accordingly, the court required North Dakota to provide a fail-safe and permit voters without a qualifying ID to vote if they signed an affidavit swearing to their qualifications.

On April 24, 2017, Governor Doug Burgum signed a new voter ID bill into law. Some legislators supporting this new voter ID bill have described it as a way to cure the problems identified by the federal court. H.B. 1369, however, does not contain any fail-safe mechanisms like the one required by the court. The newly minted law completely ignores Judge Hovland’s directive.  H.B. 1369 allows for provisional balloting, but it requires each voter to present a qualifying ID to an election official within six days in order for the vote to be counted.  In this way, the law makes an allowance for voters who left their IDs at home, but it does not address the problem of voters who, although qualified to vote, cannot obtain one of the narrow set of permitted IDs because of financial or other circumstances. Those qualified electors are not allowed to vote.

“Courts recognize that without a safety net, these laws disenfranchise voters,” Campbell added, “and eliminating the votes of poor and minority voters does not ensure election integrity. The North Dakota Legislature’s continued failure to provide any safety net is a patent Constitutional violation. The court here already said so, and it’s astounding that the lawmakers didn’t listen.”

NARF is preparing to challenge the new law in court. NARF will continue to fight against these types of unconstitutional laws that insult the very fiber of our democracy.  There is no valid reason why we should be creating obstacles for qualified citizens to vote.  And we, as a nation, must fight to ensure that every American is given the opportunity to vote in every election.