Yesterday, the President announced the creation of the “Presidential Commission on Election Integrity,” a new body intended to investigate American voters for “improper” or “fraudulent” voting.  This is not only an unprecedented attack on the American electorate, it is also completely misleading because there is virtually no voter fraud anywhere in the United States.  Instead, the problems experienced by American voters are long lines, lack of polling places, lack of early voting opportunities, gerrymandered districts, and jurisdictions’ failure to follow voting laws such the Motor Voter bill and the language assistance provisions of the Voting Rights Act.  These problems are actually increasing in American elections, in large part due to the activities of people newly appointed to the Commission.  Prominent advocates of voter suppression such as Kris Kobach sit on this Commission.

“This Commission is completely backwards; it is not the American people who need to be investigated, it is the jurisdictions using more suppressive tactics to keep citizens from voting,” said voti 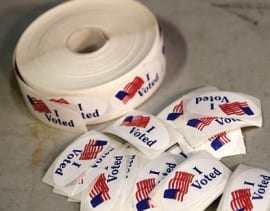 ng rights litigator and NARF Staff Attorney Natalie Landreth. “Voter suppression is designed by those in power to keep themselves in power. They know as the electorate changes, their power wanes so these tactics are meant to ‘freeze the electorate’ in a way.”

NARF has litigated voting cases on behalf of American Indians and Alaska Natives since the 1980s, and it currently leads the Native American Voting Rights Coalition, a group of voting rights advocates who work in Indian Country across the United States.  In this capacity, NARF encounters a wide variety of problems faced by American Indian and Alaska Native voters.  These problems are many and widespread, but do not include voter fraud.

“North Dakota is a great example of how this narrative works,” said NARF Staff Attorney Matt Campbell, who currently represents the plaintiffs in Brakebill v. Jaeger. “The state passed the strictest voter identification law in the country on the basis that they wanted to prevent voter fraud, but over the course of the case the state admitted there had never been a single case of fraud in North Dakota. It’s a myth, one designed to keep Native Americans and the elderly from voting.”

“It is ironic that this President purports to investigate election integrity since it is now known that he very likely benefited from Russian interference in the November 2016 election,” said Landreth. “That is what needs to be investigated, not the American voters. And I want to be very clear about why the President is doing this: he is purporting to create a record that will surely form the basis for nationwide legislation to further suppress voting.”