One of NARF’s five priorities is to develop Indian law. One effective way to advance that priority is by supporting the next generation of Indian law specialists through our Law Clerk Program. Our ten- to twelve-week summer program for second-year law students gives students the opportunity to gain real-world experience working on high-stakes, Indian law issues. NARF’s projects are extremely challenging because NARF practices before federal, state, and tribal forums, 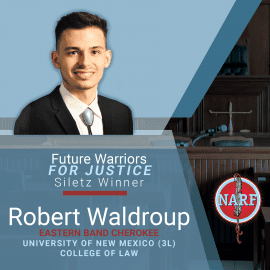 and most of our cases involve complex and novel legal issues.

This summer, the Law Clerk Program is again supported by a generous grant from the Confederate Tribes of Siletz Indianz through the Siletz Tribal Charitable Contribution Fund. Robert Waldroup (Eastern Band Cherokee), a law clerk for the Boulder, Colorado, office, is this year’s recipient of the Siletz grant.

Robert Waldroup is Eastern Band Cherokee and a rising 3L at the University of New Mexico School of Law. He is from the Qualla Boundary in Western North Carolina. Robert is a Summer Law Clerk at the Native American Rights Fund’s Boulder, CO Office. Robert will also serve as the UNM NALSA President and Editor-In-Chief of the Tribal Law Journal for the next academic year. He is earning a certificate in Indian Law from the UNMSOL Law of Indigenous Peoples Program. He is interested in areas of the law that aim to strengthen tribal self-governance, including Indian Gaming, addressing MMIWG, VAWA’s Special Domestic Violence Criminal Jurisdiction, NAGPRA, and ICWA. After graduating with his Juris Doctor degree, Robert plans on working in a position that caters to direct client services for low-income individuals in Indian country. We are thrilled to have Robert with us this summer!

Currently, we are accepting applications for 2021 fall internships. Learn more or apply to our clerkships and internship program→