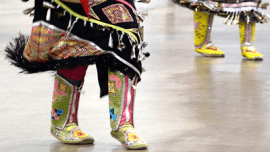 Today, the Sapulpa School District agreed to allow Liseanne Yazzie to wear her traditional moccasins during her high school graduation. Initially, the school district had denied her request. As a result, Liseanne reached out to NARF for assistance. We sent a formal letter to the district on May 17, 2016. In the letter, we pointed out the importance of traditional regalia and Ms. Yazzie’s desire to be a positive role model for Native students who still are in school.

“Schools should respect the requests of Native American students who want to wear traditional regalia during graduation,” said NARF Staff Attorney Matthew Campbell. In a press release, the school district stated that “[a]s we move forward and look ahead to future experiences, we will be establishing a procedural pathway for individual students to explain any rationale they may have for similar exceptions to be made.” Oklahoma students have broad religious freedom rights under the Oklahoma religious freedom statute, which are stronger protections for religious freedom than the U.S. Constitution. “We’re pleased that the District was willing to come to a resolution and will be creating a pathway for other Native students to honor their traditions, beliefs, and achievement,” Campbell said.