Following on the heels of the White House announcement Wednesday regarding over $1 billion in settlements between the United States and 41 American Indian / Alaska Native Tribes as compensation for the tribes’ historical breach of trust accounting and mismanagement claims, the Native American Rights Fund (NARF) today confirmed that 24 of the settlements involve tribal clients of NARF. 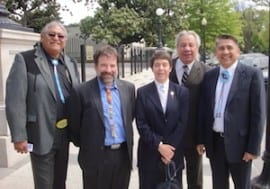 NARF, which is headquartered in Boulder, Colorado, represents over 40 tribes in such cases some of which have been in court for 20 years, and all of which have been – and some of which still are — in settlement negotiations with the government.  “The 24 whose settlement agreements were announced yesterday are simply the ones who reached agreements first for a variety of reasons,” stated Melody McCoy, the lead NARF Staff Attorney on the cases

The 24 Tribes are located in 14 different states. Many have a variety of trust assets – including land, oil and gas, timber, and other natural resources, as well as trust fund dollars — that were subject to historical federal mismanagement and for which the government as trustee had never properly accounted.  McCoy said that while the tribes had some common issues, “each tribe’s claims are unique,” and it was important to both sides that the negotiations be done “on a government-to-government basis.”  “All of our clients have put a lot of work into assessing their claims and options,” she added, “and when decisions are made with favorable results, we are very happy to support them.”

McCoy and NARF Staff Attorney Donald Wharton, along with NARF Executive Director John Echohawk, attended the White House Tribal Trust Case Settlement Event Wednesday along with several of NARF’s settling clients.  The Event highlighted the extraordinary high-level commitment of the Obama Administration to settle historical tribal claims against the government in a just manner.  “These landmark settlements come directly from President Obama through his staff and spokespeople,” said Echohawk.  “He is the first President to truly ‘own up and owe up’ to centuries of bad trusteeship for Indian tribes

The settlement agreements filed in court yesterday must still be approved by the court, which is expected to happen in the next few weeks.  Court approval will trigger the settlement payments to the settling tribes.  NARF continues to work on settlement of its remaining tribal clients’ historical breach of trust claims.