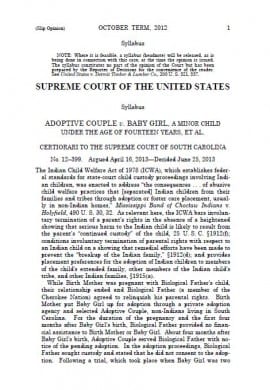 Today the United States Supreme Court issued its decision in the important Indian Child Welfare Act (ICWA) case, Adoptive Couple v. Baby Girl.  To read the decision, click here.  In the 5-4 decision, the Court upheld ICWA but reversed and remanded the case back to the South Carolina courts on a technicality.  The narrow decision focused on the standard to determine termination of parental rights in this specific case.

NARF is pleased that the Court upheld ICWA and that there is no question that ICWA is the most important law to protect Native children and families. Thank you to everyone who has worked on and followed this case.  Your support for ICWA has been historic, as evidenced by the large number of briefs supporting both ICWA and the Brown family.  Although we are deeply disappointed that this case is not over, we know that Dusten Brown will continue to fight for his daughter Veronica and we support him in that fight.