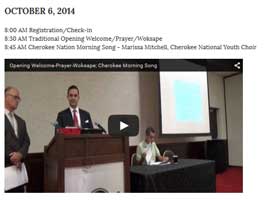 The Native American Rights Fund Indigenous Peacemaking Initiative, in collaboration with the Columbia School of Law and in response to a request from (and in collaboration with) the National American Indian Court Judges Association (NAICJA), conducted a training titled Traditional Peacemaking: Exploring the Intersections between Tribal Courts and Peacemaking, including Alternatives to Detention. The Bureau of Justice Assistance-sponsored training was held on October 6-7, 2014, in Catoosa, OK (Cherokee Nation territory). NAICJA is the Training and Technical Assistance Provider under the Tribal Civil and Criminal Legal Assistance (TCCLA) Grant.

The training was attended by 60 participants (representing 18 tribes and 7 non-profits), including two TCCLA Grantees and several Indian Legal Services sub-grantees. The training introduced grantees and other attendees to the various peacemaking models that are being used in tribal courts, including those that are being used as alternatives to detention. The goal of this training was to explore the ways in which tribal courts integrate traditional justice and community values into varied aspects of tribal civil and criminal justice, to provide experiential training and tips for accessing tribal judicial systems that utilize cultural forms of justice, and to provide explanation of how traditional peacemaking can unlock new approaches to provide effective representation of civil and criminal legal services clients, with special attention to criminal defendants whenever appropriate.