Update: Great news! On April 5, 2022, the Motion to Intervene was granted. Now the MHA Nation and Native voters will have the opportunity to represent their interests in court in a case that seeks to take away their Native-majority subdistrict.

Original Post: On March 30, 2022, the Mandan, Hidatsa and Arikara Nation (MHA) and individual Native American voters filed a motion with the United States District Court for the District of North Dakota to intervene in Walen et al. v. Burgum et al., a lawsuit brought by two individuals seeking to eliminate the majority-Native state legislative subdistrict encompassing the Fort Berthold reservation in North Dakota. The tribal government and Native voters seek to defend the subdistrict, which ensures MHA tribal members have an equal opportunity to elect a candidate that represents their interests to the North Dakota State House. 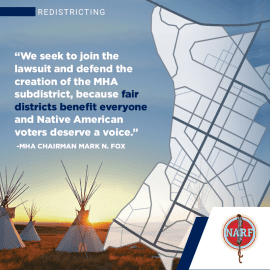 “The Mandan, Hidatsa and Arikara Nation requested the state legislature create a new subdistrict in the 2021 North Dakota redistricting process to allow voters who live on the Fort Berthold reservation to have fair elections, as required by the Voting Rights Act,” said MHA Chairman Mark N. Fox. “We seek to join the lawsuit and defend the creation of the MHA subdistrict, because fair districts benefit everyone and Native American voters deserve a voice.”

Although the state’s Redistricting Committee refused to hold public hearings on reservations in North Dakota, MHA leadership and members took every available opportunity to advocate for the creation of a subdistrict that would encompass the Fort Berthold reservation, preserve the MHA Nation as a community of interest, and contain a majority Native voting age population, as required by the VRA. In light of this advocacy, the state legislature approved a map that included House District 4A, which complies with these requirements and ensures Native voters have an equal opportunity to elect candidates to the State House.

“As a North Dakota voter, I want to join this lawsuit and defend my right to help shape North Dakota’s future,” said voter and proposed intervenor Cesar Alvarez, who is a citizen of the MHA Nation and lives on the Fort Berthold reservation. “Taking away the newly created house subdistrict would allow surrounding areas to consistently out-vote reservation voters no matter how many of us voted—and that’s not how a fair democracy works.”

The MHA tribal government and individual reservation voters seek to join the lawsuit to defend the interest of Native voters. “The state demonstrated how little it cares for input from reservation voters by refusing to hold public hearings on reservations during the redistricting process. I am requesting to defend the creation of House District 4A because I cannot sit by and let a politically motivated lawsuit dilute my vote,” said voter and proposed intervenor Lisa DeVille of Mandaree, North Dakota, who is a citizen of the MHA Nation.

“Tribal governments, reservation residents, and Native voters have faced challenge after challenge in gaining participation and equity in the redistricting process. In joining this lawsuit, the Mandan, Hidatsa and Arikara Nation and individual Native voters would have the chance to ensure the court understands the impact that dissolving the subdistrict would have on Native voting rights for the next decade,” said NARF Staff Attorney Michael Carter.