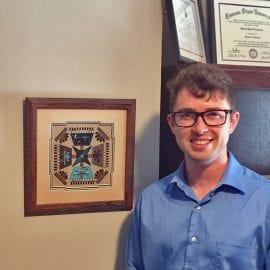 At NARF, we are dedicated to supporting the next generation of Indian law lawyers, and one way we do this is through our Law Clerk Program.  This week we’re highlighting Logan Cooper, a law clerk in our Washington, DC, office.

Logan is from San Luis Obispo, CA. His family is Nicaraguan, which is part of his inspiration for going to law school and advocating for marginalized communities. Logan is entering his third year of law school at the University of Arizona, and he will be working as editor-in-chief of the Arizona Journal for Environmental Law & Policy with a team of Native students ready to bring more of an Indigenous voice to the scholarship.

Last summer, Logan worked at the Department of the Interior in the Solicitor’s Division of Indian Affairs. He previously worked as a paralegal in an immigration solo firm. Logan’s ultimate goal is to learn as best he can the diverse needs of Native nations and work in the government to change the atmosphere to one of accountability, responsibility, and diplomacy on behalf of the United States to Native peoples. He also would like to keep working with Central American populations, especially at the intersections of Indigenous/Latinx struggles.

In his spare time, Logan loves cooking, hiking, and black/white photography, as well as cuddling with his two kittens.