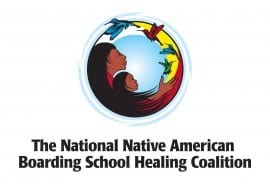 On June 15, 2017, at its Mid‐Year Conference in Connecticut, the National Congress of American Indians (NCAI) adopted a resolution, sponsored by the Chickasaw Nation, encouraging American Indian and Alaska Native Tribal Nations, families, and descendants to provide information on children who never returned home from Indian Boarding Schools. The information will be used for a submission to the United Nations (UN) Working Group on Enforced and Involuntary Disappearances (UNWGEID). This UN submission will be jointly filed by the National Native American Boarding School Healing Coalition (NABS), the International Indian Treaty Council (IITC), and the Native American Rights Fund (NARF). The submission will call on the United States to provide a full accounting of the children taken into government custody under the U.S. Indian Boarding School Policy whose fate and whereabouts remain unknown. NCAI represents 250 American Indian and Alaska Native Tribes.

The U.S. government has never accepted responsibility for the inter‐generational impacts of its Indian Boarding School policy that removed thousands of Indigenous children from their families and communities from 1869 to as recent as the 1980s for the stated purpose of forced assimilation. The U.S. has also failed to provide information about the number of children that died in government custody under this policy, nor has it provided evidence that families or Tribes were consistently informed when their children passed away or went missing despite attempts to obtain this information through Freedom of Information Act requests filed by NABS, NARF and IITC.

The NCAI Resolution “calls on its membership to gather testimony and share information, where appropriate, for the UNWGEID filing to call on the United States to provide a full accounting of American Indian and Alaska Native children who were taken into government custody under the U.S. Boarding School Policy and whose fate and whereabouts remain unknown.”

John Echohawk, Executive Director of NARF, commended the NCAI action, stating, “The adoption of resolution MOH‐17‐014 at NCAI’s mid‐year conference sends a strong message of unity to the United States and the international mechanisms related to human rights, that Native Nations will continue to push for accountability and transparency in identifying our missing Native family members who were forcibly removed from their homes, sent to boarding schools and never returned. This is an important part of the healing process for our communities and one we expect full cooperation from the US government in achieving.”

“The fate of the many Indigenous children who never returned home after forced removal by the US to Boarding Schools, including those in the many unmarked graves at former Boarding School sites, remains an ongoing human rights violation under international law.” said Andrea Carmen, Executive Director for IITC.

A primary purpose of the UNWGEID is “to assist families in determining the fate or whereabouts of their family members who are reportedly disappeared” because of direct actions or acquiescence by Country governments. There is no statute of limitations for consideration of cases by this UN Working Group.

For more information on the US Boarding School policies, their ongoing legacies, and using UN human rights bodies to defend the rights of Indigenous Peoples, log on to www.boardingschoolhealing.org, www.narf.org, and www.iitc.org. For additional information on this UN Submission or to provide information or testimony, contact Heather Whiteman Runs Him at 303.447.8760 or Christine Diindiisi McCleave at 720.408.5585.